In August of 2014, we were forced to abandon our attempt to climb Mt. Rainier (14,410′/4,394m) when two of our team were struck with a savage stomach flu at Camp Muir.  It was bitterly disappointing to have to bail and we swore that we’d be back one day…

It’s time for a rematch!

“Rainier is one of my favorite mountains in the world,” Melissa Arnot says. “It’s a long endurance climb that weaves through crevasses, over rock fins, and across beautiful open glacier slopes. It gives you every opportunity to challenge yourself and experience what mountaineering is all about. It offers all the challenge and requires all the skill you will need to climb similar peaks in the Andes, Himalaya, or really anywhere in the world.”

Note 1:  Click on any photo below to start a full-screen slide show carousel with captions.

Note 2: There are some additional videos included below the photo gallery.

On the way up to Camp Muir, the toe of the Nisqually Glacier to the west collapsed and avalanched. The sight and sound of that much ice crashing down the mountain was something to behold and respect. A not too subtle warning to take this mountain seriously for the journey to come. 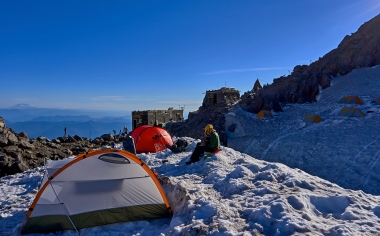 “The Last Outpost” Having dinner at Camp Muir (10,060′)…a ramshackle outpost for the NPS Ranger Station and some commercial guiding outfits and the end of the trail for tourists. You must have a permit to proceed past this point – which, of course, we have! Mt. St Helens is visible in the distance.

“Cloud City” Looking back at Camp 1 behind the natural rock fortress wall of Camp Muir (10,060′) on our way up to Camp 2 on the Ingraham Glacier. In the distance are (left to right) Mt. Adams, Mt. Hood (in Oregon) and Mt. St Helens. 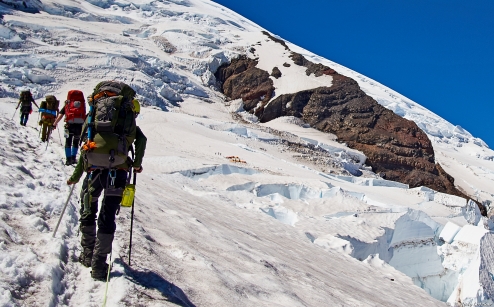 “Ice Station Zebra” Approaching Camp 2 (11,200′) on the Ingraham Glacier below “The Disappointment Cleaver”, the rock wall that will be our route to the summit the next night.

Spencer, Kier and Simon (in the tent) chilling beside our small two-man tent on the Ingraham Flats (our large 3-man tent is seen in the next photo).

As the sun sets, the shadow of the massive mountain slowly rises up into the sky to the east. After a day off at Camp 2 to acclimatize to the altitude (you have to give your body time to generate more red blood cells to better absorb the limited oxygen out of the air) we were ready for our summit attempt! | Dinner at 4pm. Set out gear at 5pm. In bed at 6pm. Awake at 10pm. Ready to climb by 11pm. | The team poses for a group shot before heading off into the freezing darkness. [Left to right] Spencer (14, Ontario), Simon (17, B.C.) and Keir (14, B.C.). They won’t get back to camp until sometime the next afternoon but for now…time to rock!

We are strangers in a strange land. Climbing in the freezing darkness up the great mountain past gaping crevasses and strange ice formations created by the moving glacier – lit only by our headlamps. Higher and higher we climb. The hours passing by as the night wears on…

Into the night we climbed… Alternating our attention from the ground in front of our feet to the other teams climbing on the steep slopes above our heads, the darkness that enveloped us made it difficult to gauge our progress up the massive mountain. As the night wore on, and we worked our way further and further upwards, it became obvious that the dawn couldn’t be too far away… 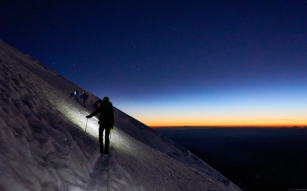 What could possibly motivate someone to get out of their nice warm cuddly sleeping bag and start climbing up a mountain in the freezing darkness before midnight? Being up here at dawn…a reward beyond compare!

Here comes the sun! Now, for the first time, you can see how high you’ve climbed…and how far you will eventually have to descend to get back to camp after the summit is (hopefully) reached. Oh well, no one said this was supposed to be easy. 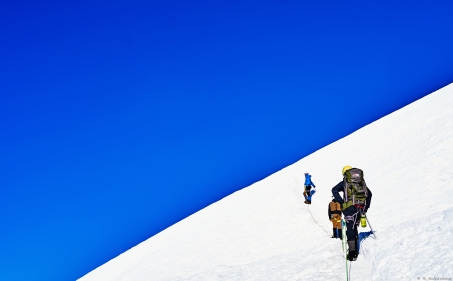 Nearing the summit. | “I’ve learned that any dream worth dreaming is the dream with the uncertain outcome. If we knew we would be successful, if we knew it would be easy, if we knew it would be a certainty-filled challenge that was cozy and comfortable, without hardship and adversity, then what would be the point? This is how you induce transformation and growth. Conceive of the most outrageous dream, put it out there and activate your inner hero’s journey. Where comfort zones are obliterated, extraordinary life experiences begin.” – Elia Saikaly

Crossing the crater on the way to the summit (upper left). There was no way to ignore the fact that you were standing in the mouth of the most dangerous stratovolcano in North America when you saw the vents scattered around the perimeter steaming out hot gases. Resting inside the crater. We’ll climb the final 200 feet to the summit and “ring the bell” (send up a message announcing our presence on the summit using our DeLorme inReach satcom device) in due course…but for the next half hour or so the team takes a well-deserved rest. 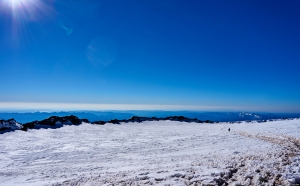 “In the Maw of a Titan” Simon (17) makes his way across Rainier’s crater towards the summit crest. For the first time in many hours he walks alone…no longer tied to his team…no longer responsible for them…the burden of being the leader lifted, if only briefly. All his efforts since 11 pm the night before were focused on leading his team to this place. Soon his focus will shift and he will have to direct all his effort into getting his team safely back down the mountain as the sun cooks the snow, ice and rock on the route that got them here.

Mission Accomplished! Simon (17), Keir (14) and Spencer (14) pose for a summit photo beside the USGS marker (metal peg in front of Keir) showing the official high point of the mountain (14,410’/4,390m). . The badge Keir is holding is the 2016 Mountaineering Camp badge that was taken to the summit of Youngs Peak in Rogers Pass this summer by the girls in week one and the boys in week two. The badge is a gift for a little boy in Ontario named Jacob who is fighting leukemia. The guys thought it would be cool to take it to the summit of Mt. Rainier before sending it off to Jacob.

This flag has sure travelled…it’s been to the summit of Mt. Kilimanjaro in Tanzania (2013) and Youngs Peak in Rogers Pass (every summer since 2013). Perhaps we should have all the summits printed on it? 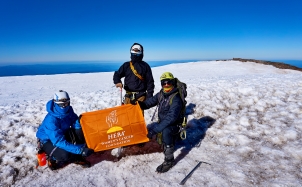 In memory of Simon’s mother, who was taken from him by this terrible disease in 2010. This flag goes with us on every climb. 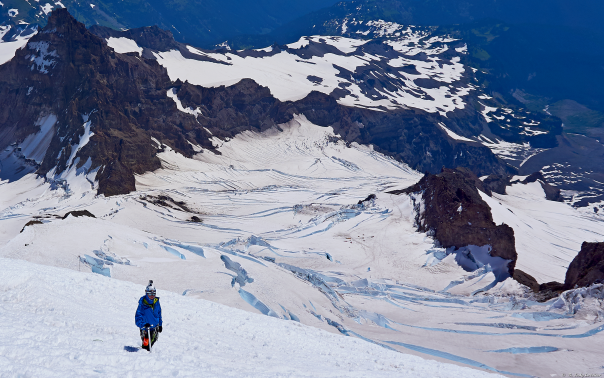 “Getting to the top is optional. Getting down is mandatory.” – Ed Viesturs | The level of sustained focus required to make sure every step you take is a sure step when you are tired after climbing all night and day is definitely taxing. Getting down presented its own challenges especially with the sun cooking the route all the way back to camp. You can see Camp 2 way down below (center right).

Heading back to the Cleaver.

The Three Amigos (L2R: Simon 17, Keir 14 & Spencer 14) carefully working their way down the Cleaver on their way back to their high camp on the Ingraham Flats (visible center right). Amazing place…you’re really not safe until you’re back at camp 2…and then you’ve still got a climb left to get back to camp 1 at Muir. What an adventure!

Carefully making our way down the spine of the crumbling rock wall known as the “Disappointment Cleaver” with sheer dropoffs on both sides of us. On this mountain, there ain’t no rest for the wicked. You must stay focused all the way back to camp. One misstep could be disastrous.

Almost off the Cleaver.

“Challenges are what make life interesting; overcoming them is what makes life meaningful.” – Joshua J. Marine | The night before, in the frozen darkness, we blew across the aluminium ladder bridging this massive crevasse without much hesitation… The next afternoon, fatigued and dehydrated, we approached the last obstacle between us and camp…wide and bottomless…the snow holding the ladder softer now after being baked in the sun…brilliant daylight making not seeing the sheer icy blue walls descending into nothingness impossible…but camp is less than a kilometre down the glacier…your knees wobble and your stomach churns…you swallow…take a deep breath…calm your mind…grab the safety line…and go!

The boys pose for one last photo on their way back down to Paradise and home. | Q. What does it take to climb Mount Rainier? A. Everything you’ve got.