Welcome to the High Life!

To pull this off, the team spent a night at Camp 1 at Camp Muir (10,50′) and the following three nights at Camp 2 at Ingraham Flats (11,200′).  Well, technically, we only spent two nights (the first night and next day we relaxed while our bodies acclimatized to the altitude) at the Flats since the second night (and the better part of the next day) was spent climbing the mountain.  After returning from the summit, we got a well-deserved night’s sleep at Camp 2 and then hiked off the mountain and headed home the next day.

For the full story and more photos (and videos) check out our adventure blog post. 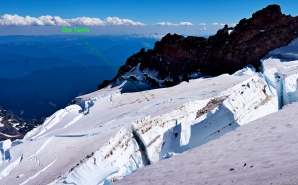 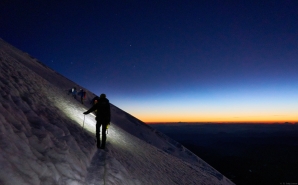 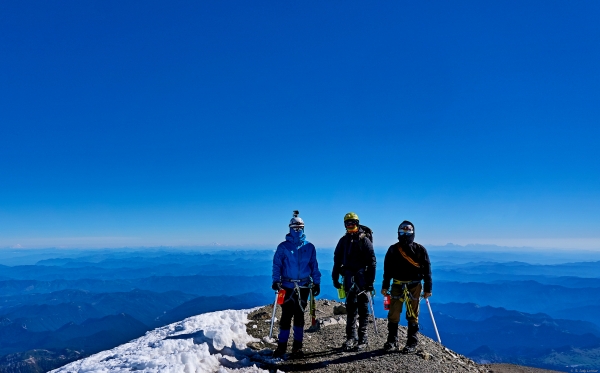 We had two back-to-back weeks of mountaineering camp up in the mountains this year!  The first week was all-girls and the second was all-boys.

The weather was challenging (snow and rain) throughout both weeks but, at dawn on both Thursday mornings (July 7 & 14, 2016), after three days of training, the skies cleared long enough for each team to make it to the summit of Youngs Peak (9235’/2815m).  To expedite our descent down the 500 foot tall glacial headwall this year, we set up a nearly 400 foot rappel line using two 60 metre ropes tied together.  What a blast!

Another successful mountaineering camp this year!  We were able to get the full team to the summit of Youngs Peak (9235’/2815m) after three days of training.  Seven team members came from Ontario and five from British Columbia.

Click any photo below to start a full screen carousel slide show with captions.

The participants at the 2015 Mountaineering Camp: Rogers Pass are ready for a week of alpine adventure!

Rope Team One enroute to the summit of Youngs Peak (9235’/2815m) in the early morning during the 2015 Mountaineering Camp: Rogers Pass. 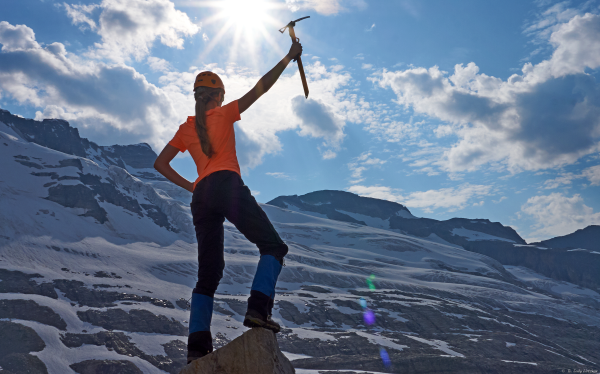 For the latest information on our annual Mountaineering Camps: Rogers Pass check out the official website.

If we can solve all the logistical issues, we’ll be hosting our first ever Advanced Mountaineering Camp: Tantalus Range based out the Alpine Club of Canada’s Haberl Hut high up in the Tantalus Mountains at the north end of Howe Sound above the town of Squamish!  [Update:  Advanced MCamp will happen in 2016.]

What a summer!  We spent two weeks in Rogers Pass running our two week-long (back-to-back) 2014 Mountaineering Camps (week one’s team summited Youngs Peak [9,235′] but week two got hit by a storm that cheated the team out of their summit attempt).  We took a week off and then headed down to the States to take a crack at Mt. Baker and Mt. Rainier.  We didn’t summit either mountain but we did have some high alpine fun and learned a lot about both mountains.  We’ll be back next year to have another go at them!

Our new Mountaineering Camp website (mountaineeringcamp.com) has launched!  This is the official source of news and information about our annual invitational (composite) week-long mountaineering school in the mountains of British Columbia.  This camp is open to all Scouts and Venturers across Canada.

The 2014 Mountaineering Camp will once again be based out of the Asulkan Hut in Rogers Pass, Glacier National Park.  Check out the helicopter cam video that we made last year (we hooked two GoPros to the helicopter that brought in our food for the week and filmed the entire trip from Golden to Rogers Pass) to see where we get to play again this summer (go full screen and jack up the resolution for the full experience – bonus points if you like Imagine Dragons “Radioactive”):

We hope everyone is getting out and having some fun winter adventures! 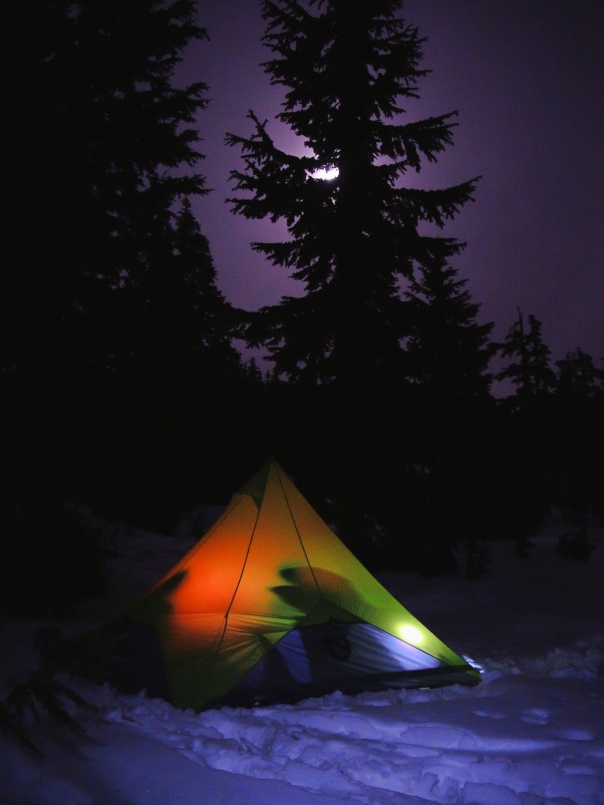 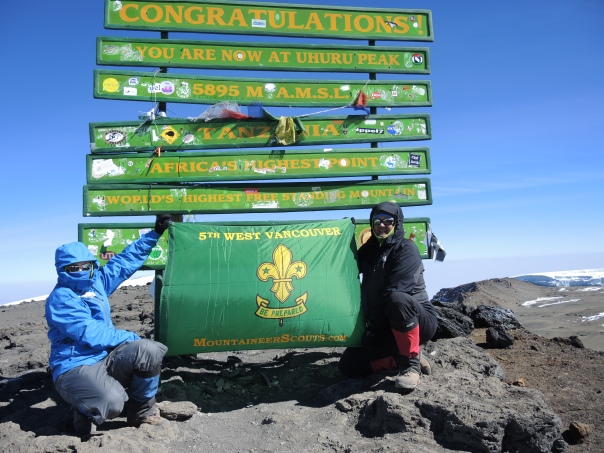 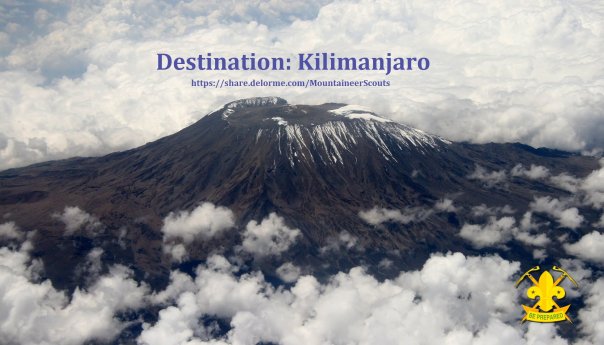 On July 24, this 14 year-old Scout will begin his journey to the other side of the world in an attempt to climb one of the legendary Seven Summits!

Follow his adventure as he travels from Vancouver to the slopes of Mount Kilimanjaro in Tanzania for his ultimate challenge (July 28-August 3).

Follow his climb in real-time on our MapShare page and see daily stories and photos on our Facebook page. 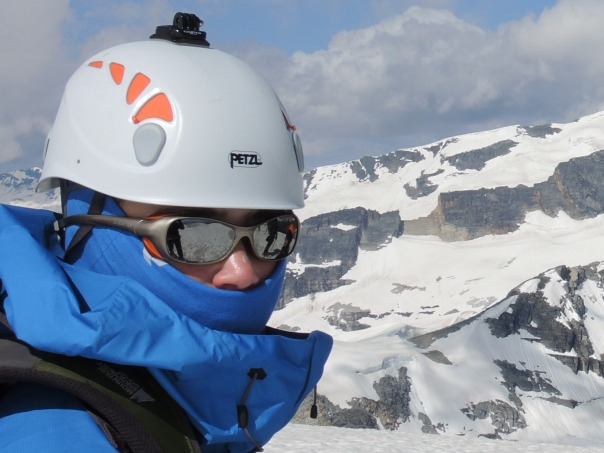 Thank you Parks Canada for allowing us to spend a week above 7,000 feet at the Asulkan Hut in Rogers Pass!

A new year…time to raise the bar!

The Boss agrees:
“Yes….this IS supposed to scare your mother.”

Well, we lost a couple of boys over the summer but were lucky to recruit a couple of keen new lads so I guess we’re going into our second year of operation even.

We’ve had our first backpacking camp up at Cheakamus Lake last weekend and the boys had no problem at all carrying their loads.

The next challenge will be to take those loads up into the alpine.

Our  second annual Investiture Ceremony on top of the Stawamus Chief will take place in two weeks.

Our first trip up into Garibaldi Park will take place in three weeks.
If all goes well, we’ll climb Black Tusk and later take a stroll on Helm Glacier with crampons and ice axes.

Before you know it, the snow will start to fall and we’ll be in the middle of another amazing winter here in B.C.

We are planning a special Mountaineering Camp for next July in Rogers Pass (the week before the national Jamboree) that is open to all Scouts in Canada.  There are still plenty of spaces available for Scouts and a few spaces left for qualified leaders/instructors.

If you want to take your adventuresome nature into more exotic locals, you might also consider joining us next summer when we climb Mt. Kilimanjaro (19,341′) in Tanzania!

If you want the ultimate challenge and adventure, join us in 2015 when we travel to the Himalayas in Nepal for a trek to Everest base camp (17,598′ – Sagarmatha National Park) followed by an expedition to climb Baden-Powell Peak (19,324′ – Langtang National Park).

“Kilimanjaro is a snow-covered mountain 19,710 feet high,
and is said to be the highest mountain in Africa.
Its western summit is called the Masai ‘Ngaje Ngai’, the House of God.
Close to the western summit there is a dried and frozen carcas of a leopard.
No one has explained what the leopard was seeking at that altitude.”

― Ernest Hemingway, The Snows of Kilimanjaro

The Year So Far…

The boss is pleased!

Now that the winter camping season is over, let’s do a quick recap of the year so far:

Not too bad for our first year, eh?

And we’re not done yet!

“Those who say it can’t be done

should get out of the way of those who are doing it.”

What would the boss have done with the internet?

The 5th West Vancouver Scout Group fell dormant a number of years ago but now they’re back!

The “5th” is based in the Gleneagles/Horseshoe Bay area of West Vancouver.

At our inaugural meeting on September 13, we had a good turnout.

We currently have eight scouts: two with previous service as Scouts (a natural choice for Patrol Leaders) and six new recruits!  I expect to see a couple more new recruits attend our next meeting.  Not too bad so far.

With three leaders (two veterans and one new recruit), we’re off to a good start!

Now, to get all the registration paperwork out-of-the-way and all the boys into uniform!

There is so much to do.

Our first camp is only a few weeks away…

Follow our continuing adventures by clicking on the “Our Adventures Blog!” menu.

You can also subscribe to the posts on the  “Our Adventure Blog!” page by email by registering in the second box of this page’s right sidebar.

Finally, remember that you can ENLARGE ANY PHOTO on this website by clicking on it (press “back” to return to the original page).

For all readers of this web site:

If you have any comments, suggestions or content that you want added…please just email me or post a “comment” in the appropriate section.  I will respond!  I want this to be a community resource for Scouting and need your input and support.  For example, if you think I’m off the mark regarding any of my Gear recommendations or Skillz information, let me know.  Let’s have a dialogue.  Thank you!

BTW…this website is a work-in-progress…don’t laugh too loudly as I stumble about trying to make everything work properly (hey, this is my first attempt at creating a web site). 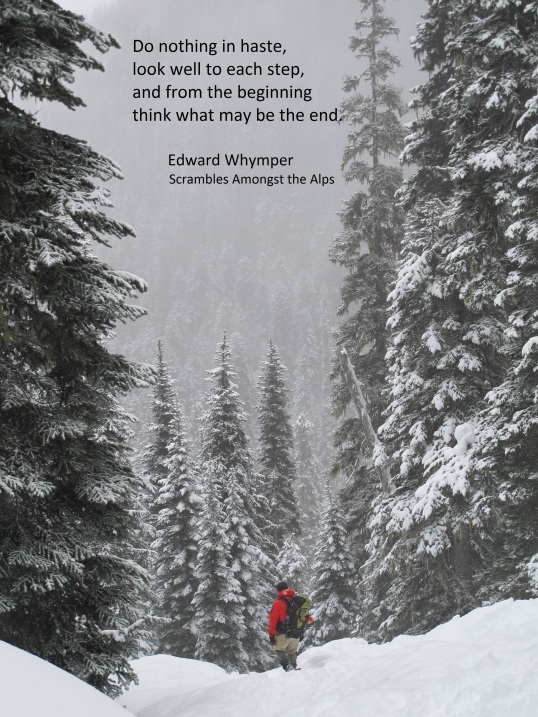