We held our year-end BBQ at Whytecliff Park and got our first try at climbing at our new home crag (only about a kilometre from our meeting hall).  We dubbed the crag the “Royal Flush” (i.e., “WC” for Whytecliff and the bottom is a bowl that partially fills and empties with water during the day).  The Scouts have come a long way since their first try at rock climbing a few weeks ago!

Special thanks to Scout Mom, Helen, for organizing the BBQ party!

On behalf of myself and all of the Scouts, I say, “Thank You” to all of the parents for having the courage to let us have such a wonderful first year adventure as “Mountaineer Scouts”!

Now… what should we plan for next year and how are we going to top this year?  Well, I might just have a few ideas……

Getting ready at our new climbing wall. The anchor is up; the rope is down; now who wants to christen our new home crag!

Scout Simon starts charging up the wall. We’re going to have to spend some time later cleaning this baby up; there’s grass and other crud all over the place.

It’s starting to get more difficult as the cracks get narrower and narrower. 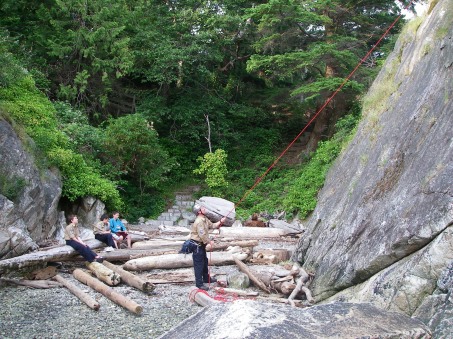 Simon takes a break to watch Scout Isaac going strong over 40 feet up! I estimate the section of wall the boys are climbing to be ≈60 feet high. 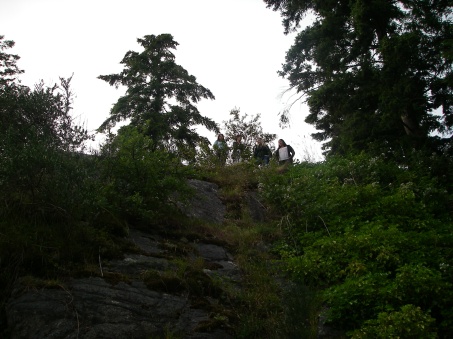 The Scouts’ moms all gathered high up on the opposing wall to get their first look at their sons rock climbing. The cheers and applause was a fun addition to our sport! 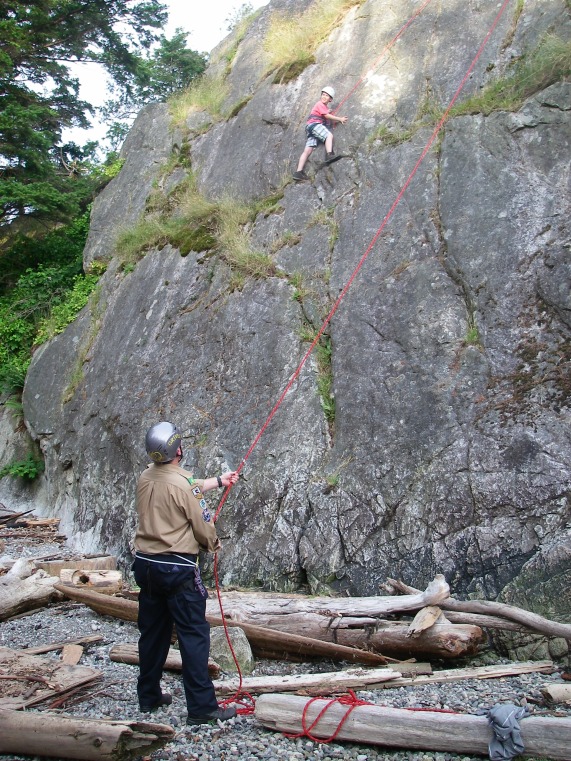 Scout Tavish takes a break at the ledge to check out his admirers at the top of the opposing wall.

With the sun setting over our new home crag, Scout Tavish soaks in the applause from the Scout moms upon reaching the top for his first time! 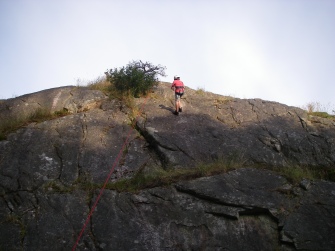 Scout Tavish starts back down the wall – happy and victorious!

One of the Scout moms watches intently while a Scout work his way up the wall as the sun starts to set on our wonderful first year of operation! 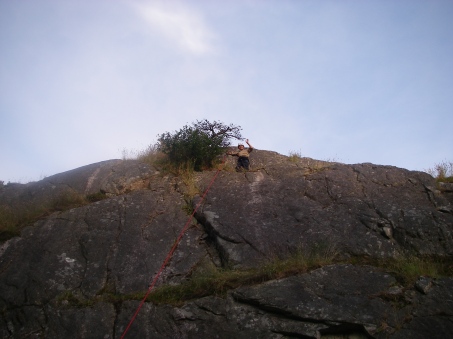 Scout Max gets his turn in the limelight to enjoy the cheers from the onlookers on top of the opposing wall when he reaches the top for the first time too!

Scout Simon’s sister, Samantha, gets her first try at rock climbing ever!

Leaders Need to Sharpen Their Skillz Too! (Part 2*)

Scouter Jody first learned his mountaineering skills during the Ford and Carter administrations.  Suffice to say, retraining was high on his list of priorities for the year!

Accordingly, he applied for and was accepted into the Alpine Club of Canada, Vancouver Section’s coveted annual Basic Mountaineering (BM1) training program:

Here are some of photos and stories from the course’s final challenge – climb Mt. Matier:

As we ascended the Northeast ridge of Matier we got a striking view of her sister peak, Joffre (8,927 ft/ 2,721 m) rising out of the clouds behind us.
All of the great peaks for miles in every direction around us appeared as islands scattered across a sea of clouds.

Earning every step on the way up.
Falling chunks of dislodged ice would fly past us from above and then disappear quietly into the soft blanket of cloud hiding the Matier and Anniversary glaciers far below (one chunk the size of a football hit me in the shoulder and partially spun me around – it was comforting to be wearing a helmet).  Naturally, we were on the “don’t fall” (or drop anything) plan that morning. 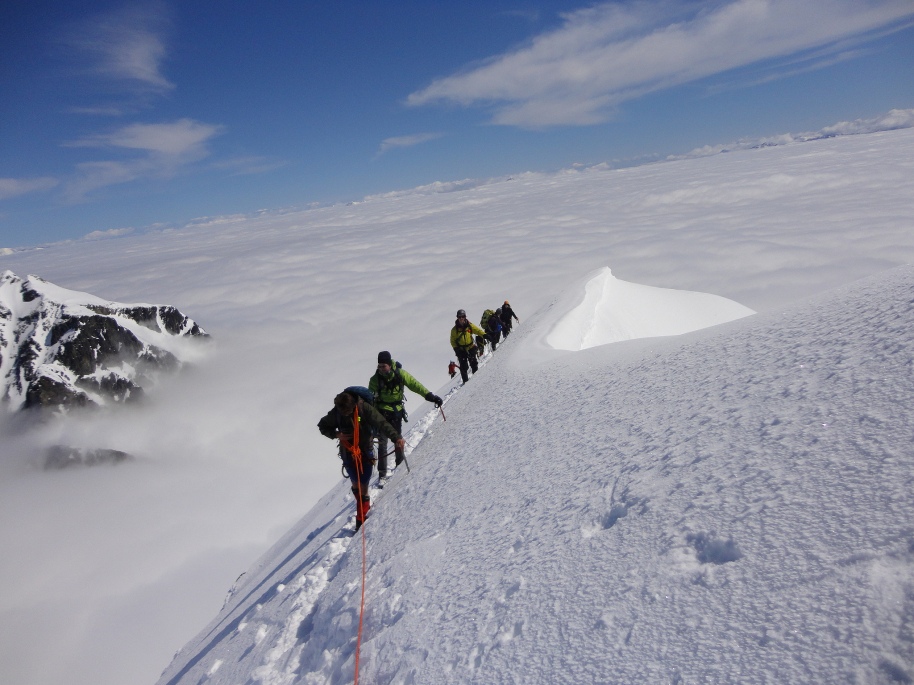 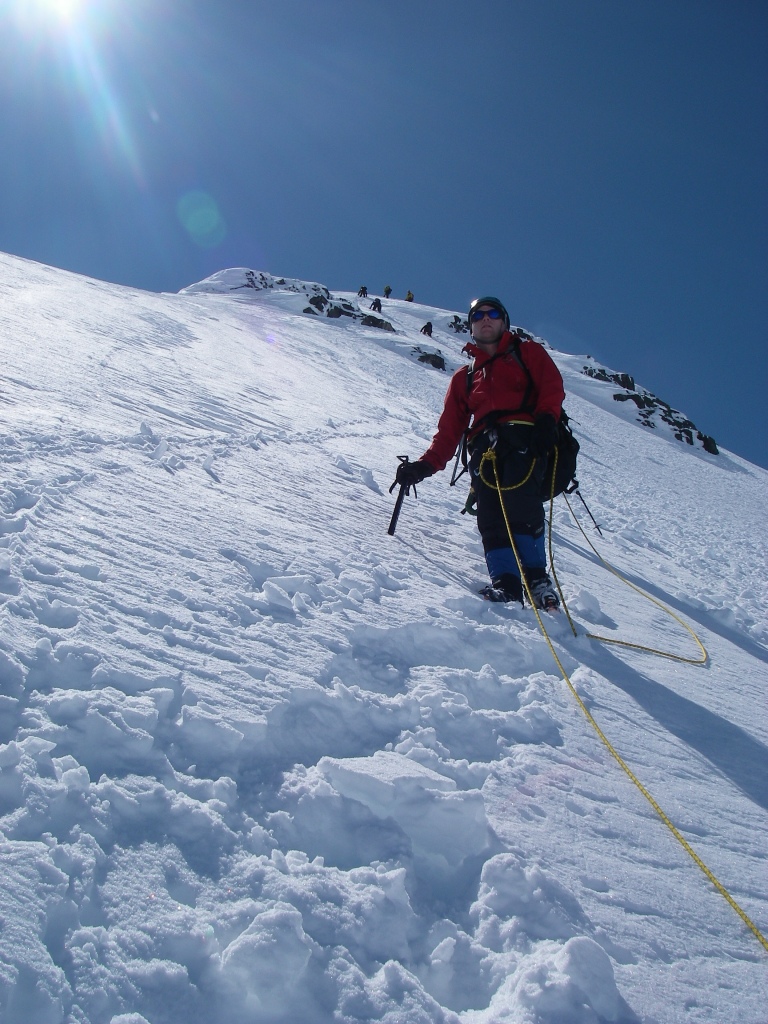 Climbing rope-mate John takes a moment at 9,000 ft. to enjoy the stunning view before we descend back down into the clouds.
.
There was little time to enjoy the moment, however, when we began hearing the roar of avalanches in the mountains below us.
As we were ascending, the sun had been cooking the slopes below through the fading morning cloud.
Once we descended far enough we discovered that our ascent route on the north side of the valley had been wiped out by avalanches and was no longer safe to use. By then, the south side of the valley had also begun continuously avalanching.
.
Ultimately, the decision was made to sit out the afternoon in a safe spot on an elevated rock bluff in the middle of the Anniversary Glacier and wait for at least five hours for the sun to go down and the north slope to harden up before finishing the journey back to our camp (which we could see about 3 kms. below us). It took a bit of ingenuity to devise snow melting “stills” to supply the team with the one necessity that we had all pretty much long depleted. Once we got the water production underway there was nothing to do but lay back and enjoy each other’s company during an enforced afternoon on the “beach” while we watched nature’s show of force as avalanche after avalanche crashed down the slopes on both sides of us. 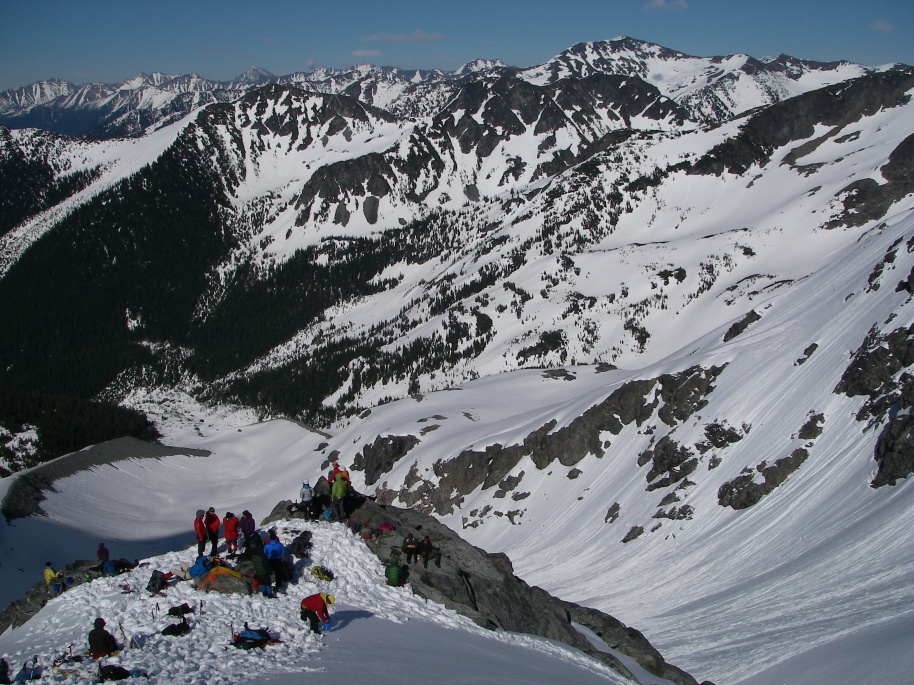 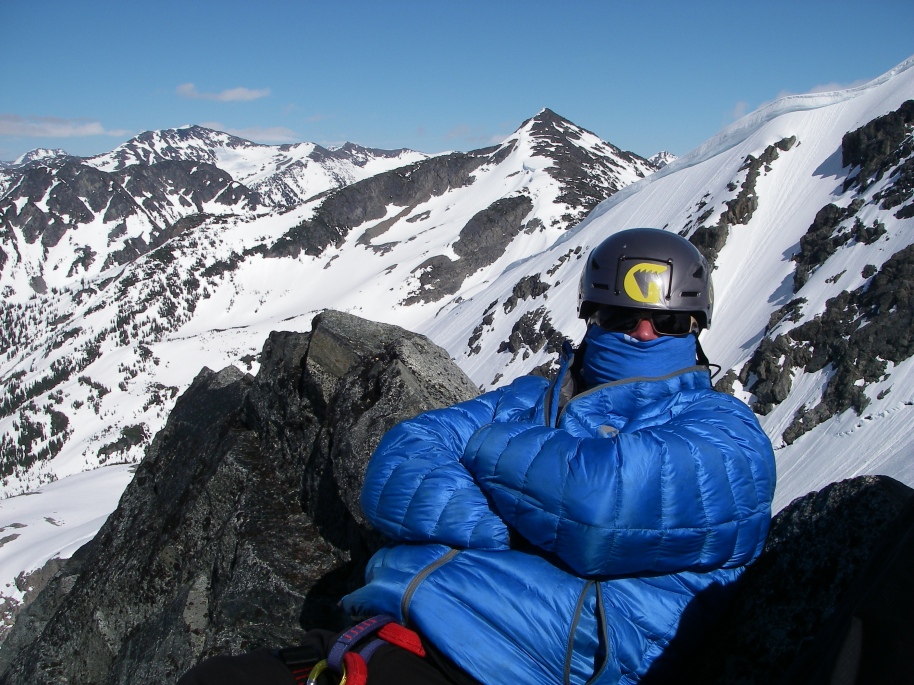 Chillin’ in the middle of a giant reflector oven and enjoying the company of a great group of guys and gals!
Nothing left to do but hydrate and wait for the sun to go down (and, no, I didn’t burn my nose).
.
Once we felt the north slope was sufficiently firm, we double-timed it across the debris fields one rope team at a time.
.
It was a long day…
We had an “alpine start” at 3:30 am and did not get back to our camp at 5,400 ft. until after 8 pm.
We quickly packed up and began the long hike down the mountain and out to the cars by 9 pm.
Hiking through the dark with headlamps we reached the cars well after 11 pm and then began the 3 hour drive back to Vancouver.
I didn’t get to bed until 3:30 am.  Tired, sore and happy.

Here’s the last two teams making their way through the north side of “Avalanche Alley” as the sun is sets on Matier.
Use the size of the two rope teams going through the avalanche debris fields to judge the scale of the area. 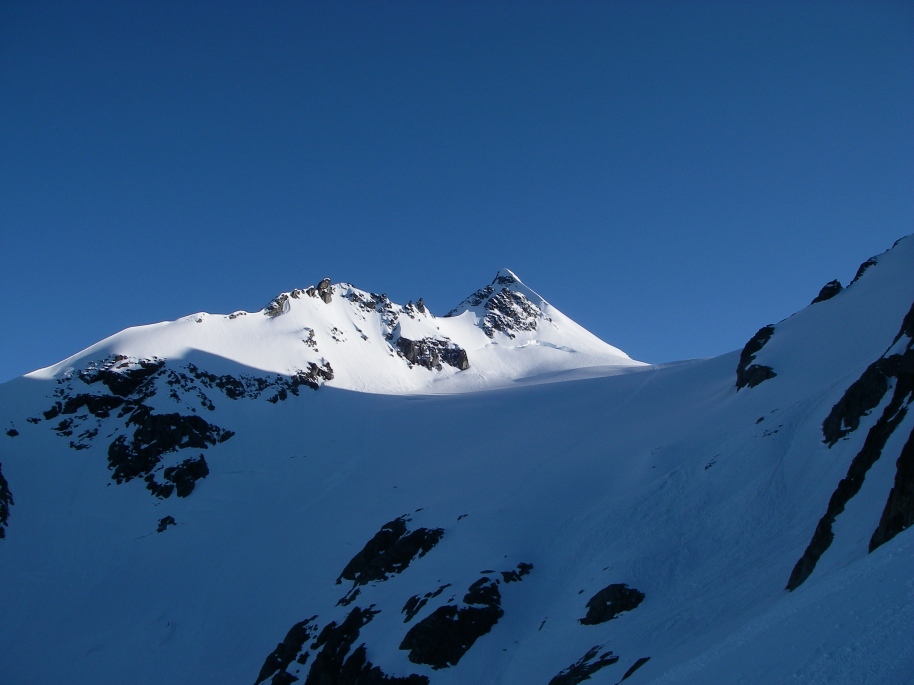 Here’s a picture of Matier that I took after our last rope team crossed from the top of that rock formation in the middle of the glacier through the avalanche debris fields to safe ground (where I’m standing). By sitting tight for the afternoon we were acting at the maximum level of caution.
.
Many other groups would have opted to take their chances and make a run through the hazard zone.
.
There’s an old saying:
“There are many bold climbers and there are many old climbers but there are only a few old, bold climbers.”
.
Play safe and Be Prepared!